Share on facebook
Share on linkedin
Share on twitter
Share on email
It all started when a couple decided to move back to India from Singapore after spending years there. Let me introduce you to this wonderful couple, Mr. & Mrs. Nihalani who now own an appartment in Pune and have done it up very aesthetically. Their home reflects their warm personalities.
Mr. Nihalani is a perfectionist and has got an eye for beauty and details. The moment I saw their home, I was completely awestruck by his good sense of aesthetics. Whereas Mrs. Nihalani is a very warm, pleasing, soft spoken and sophisticated lady. They have a son, who is working in Singapore and a daughter, who is in New Zealand and just completed her bachelor’s degree. Their family is a sweet and small family.
Since Mrs. Nihalani had left her job, she was having quite a lot of spare time in her hand to explore new things. She decided to take up the activity that she has never done before. She never tried her hands on painting so she chose to learn to paint. Being a motivating husband Mr. Nihalani suggested to go for Warli painting for its simplicity. She then searched about Warli on Google and stumbled across my blog, she contacted me, we exchanged few mails and then she was all set to learn this art from me. Within a month she not only learned but mastered this art form. Given her non-artistic background I was totally stunned by her grasping power and enthusiasm to learn new things at this phase of life. Here is how she excelled in Warli art.

It didn’t stop here. Couple wanted to do makeover of their balcony which was plain and dull at that time. She asked me if I am ready to take up this project and I accepted the opportunity without further ado. But she put across one condition that she will going to accompany me while I will be doing this project and who will not accept such a sweet proposal.
We started the project in October last year. She took out some printouts of Warli paintings she liked and showed them to me. It gave me fare idea what exactly they wanted. Here is the layout of their balcony. Wall 1 and wall 2 are adjacent and door is between them.

Here I have created panoramic picture of their balcony to give you rough idea about how it looked earlier.

Wall 1:
We started with wall 1. It was primed and painted. This wall was painted keeping Mr. Nihalani’s choice in mind. He wanted the village scene painted in white on this apricot colour wall and dancing Warli figures on white panel above in apricot colour.

I drew few village scenes on paper and they chose one with few modifications and then started this beautiful journey of my first commissioned Warli painting on wall. First we traced design on the wall. Here you can see us in action 🙂 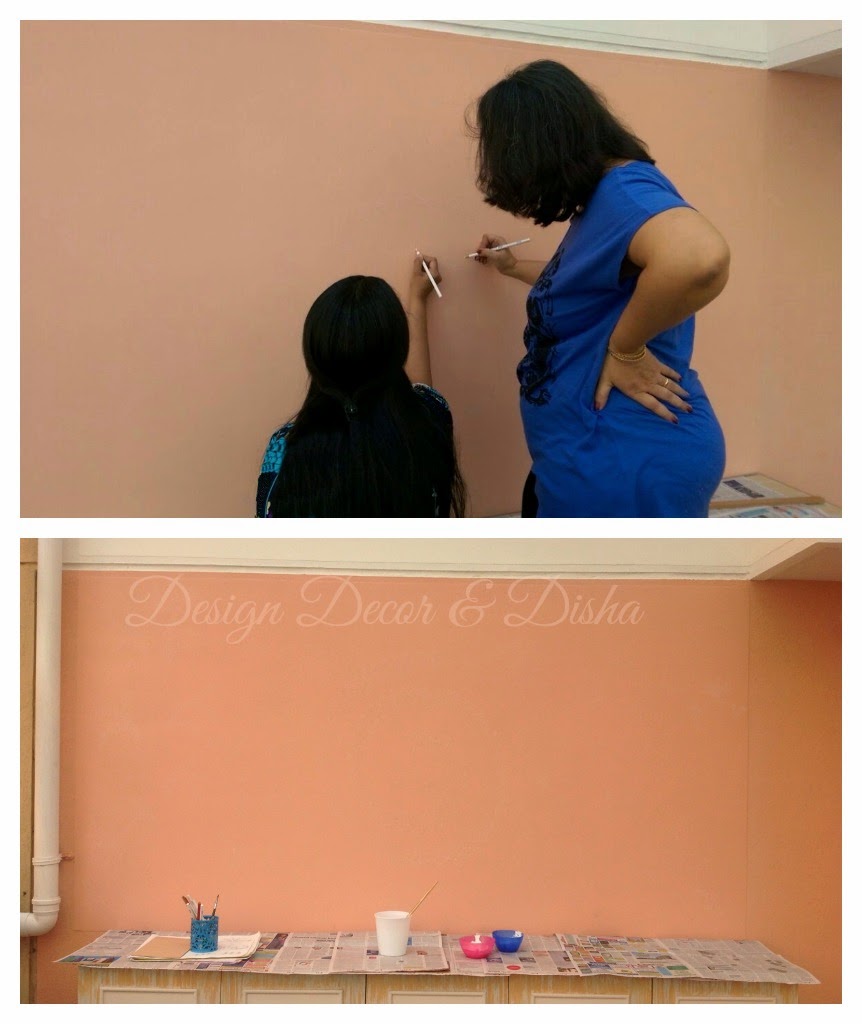 After tracing was done, we were ready with our brushes, paints, water & rag. Then began the fun part of painting the wall. Everyday while painting Mrs. Nihalani would put on some music and we would get lost in some other world. It was an amazing experience for me. She even told me her love story too 🙂
Here is how our work progressed…. 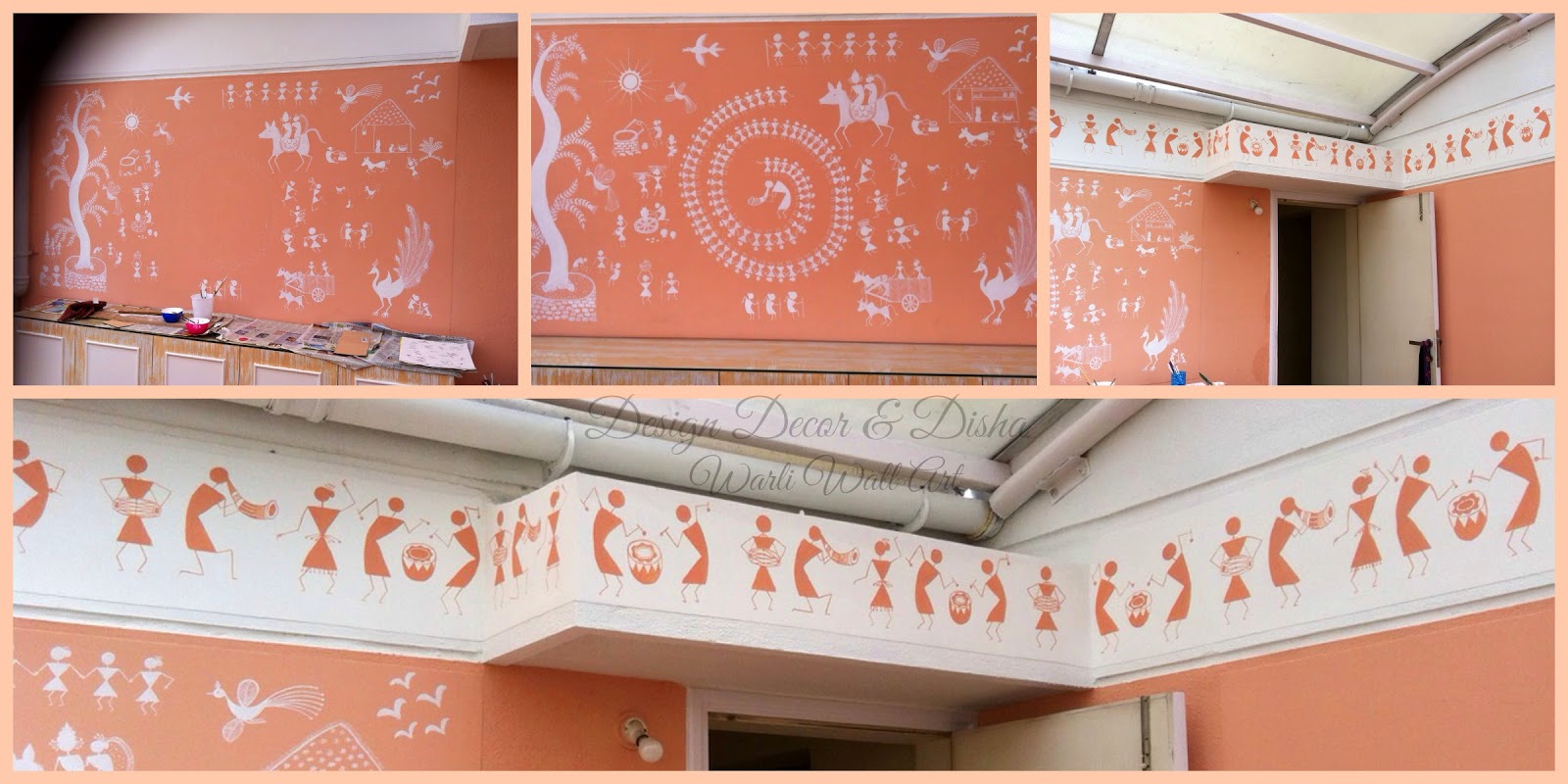 I liked the dancing Warli figures on panel above. I used huge step ladder to paint these figures….see it was kind of adventurous too.
Here are some close ups of the wall. I like little flaws here, they make the painting look all the more beautiful. 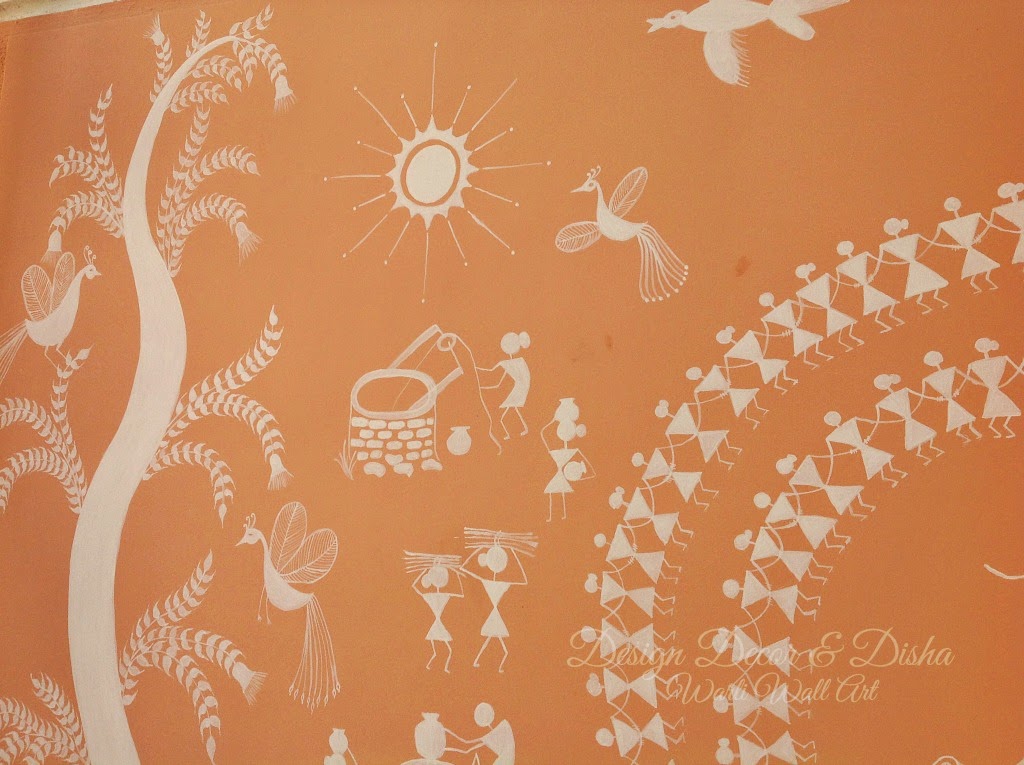 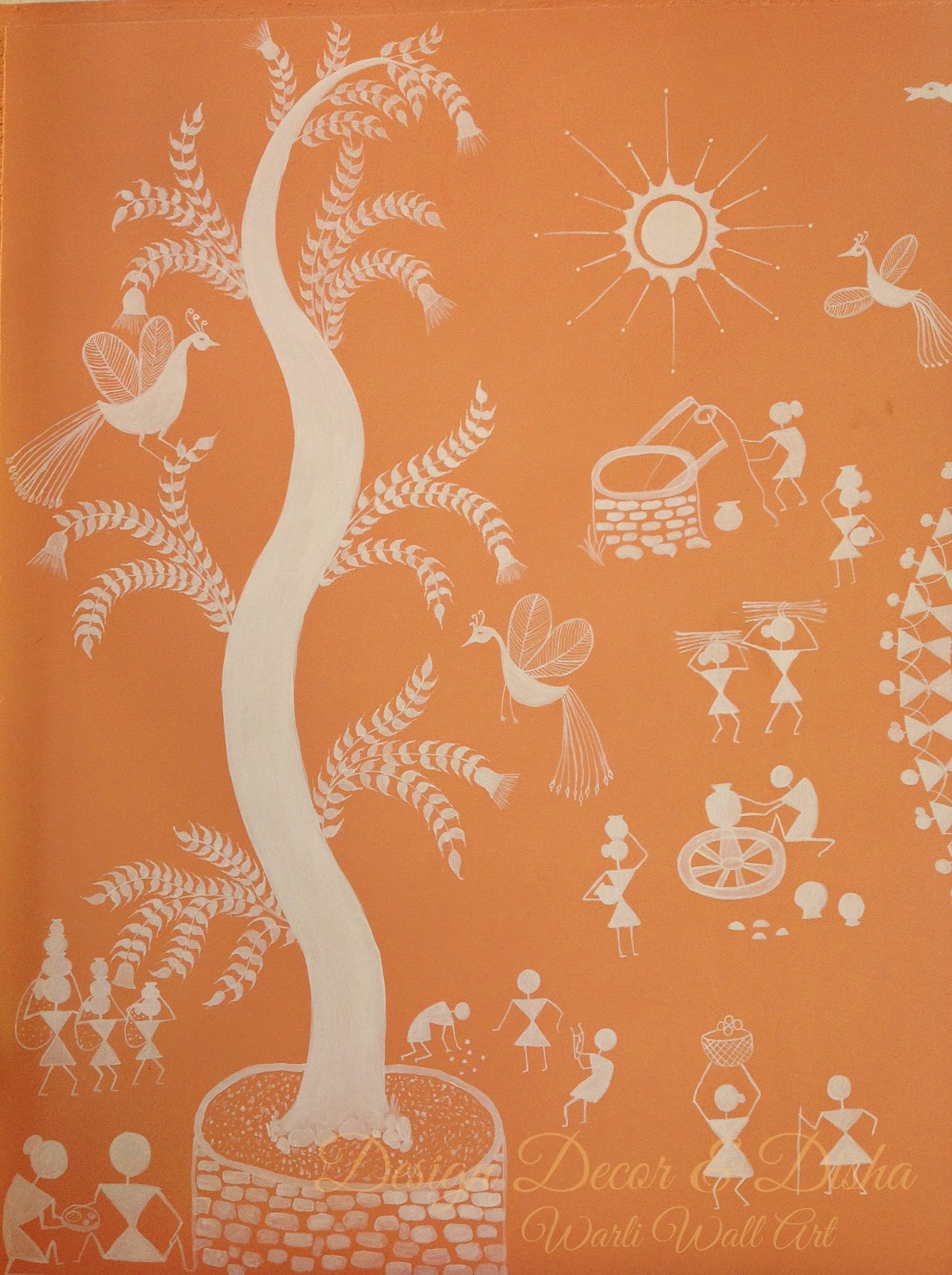 Horse here is looking more like puppy, but during final touch up I tried my best to make it look more like horse. 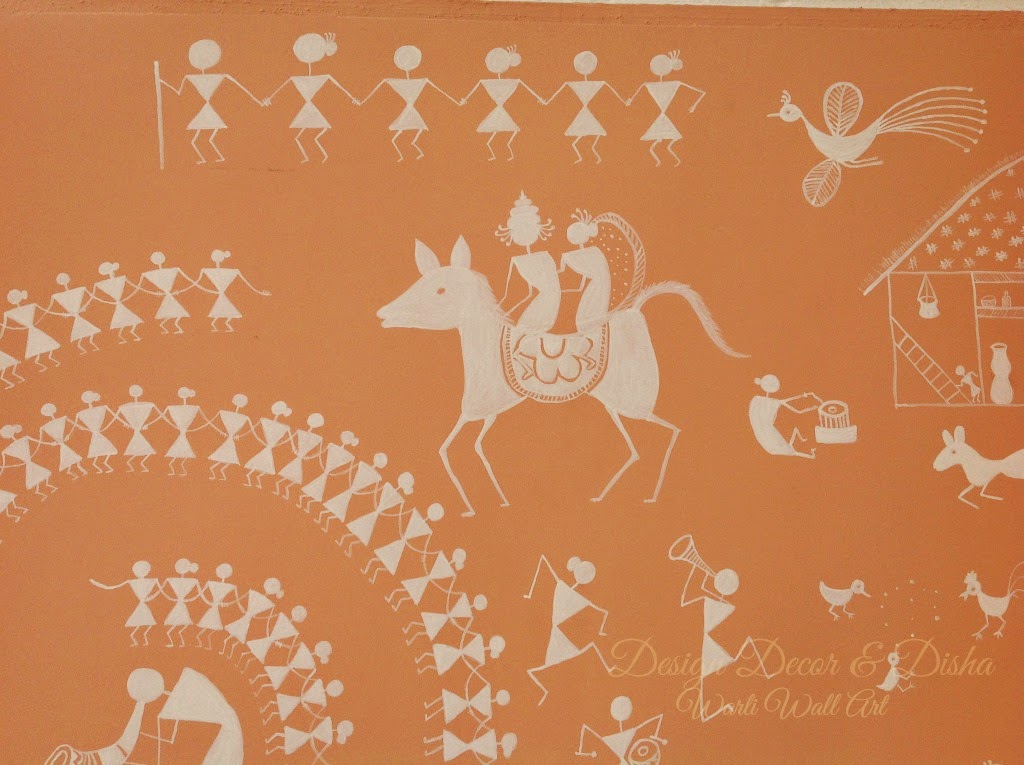 Almost all small figures are done by Mrs. Nihalani. See I told you she not only learnt but also mastered this art. 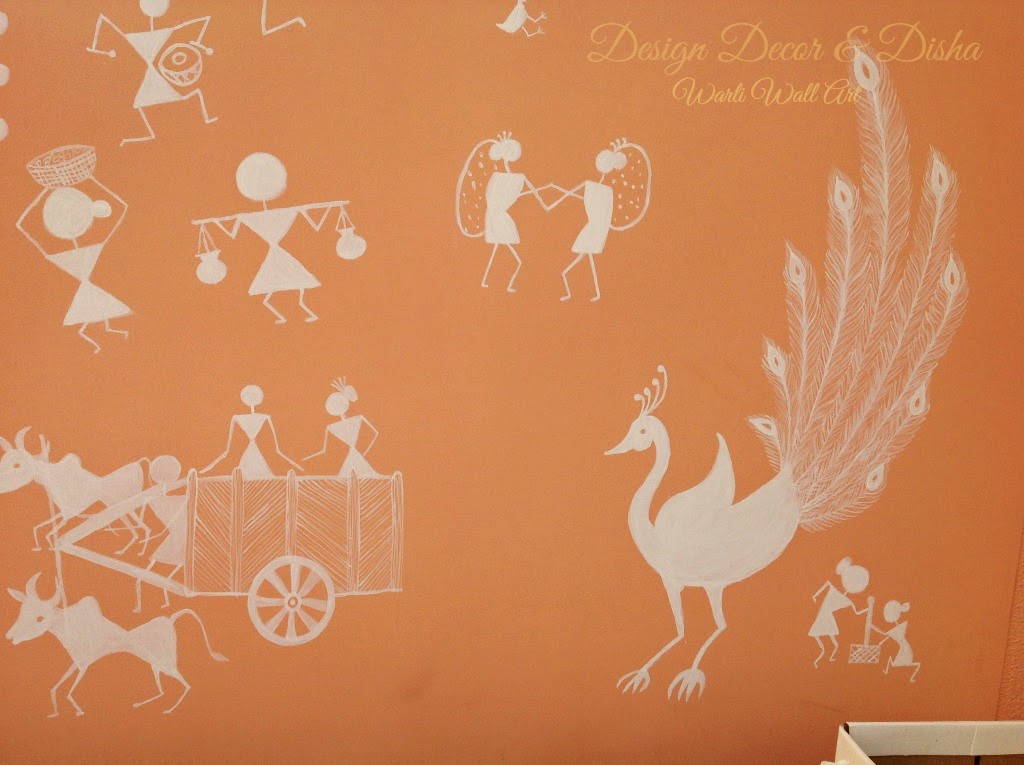 Wall 2:
Now comes the second wall. It was painted according to Mrs. Nihalani’s choice. She wanted a Warli marriage theme painted in earthy tones on the wall 2. She loves warm and earthy tones so we chose burnt sienna, orange, copper, pale yellow, green and little bit of red.
Here is before picture of the wall. 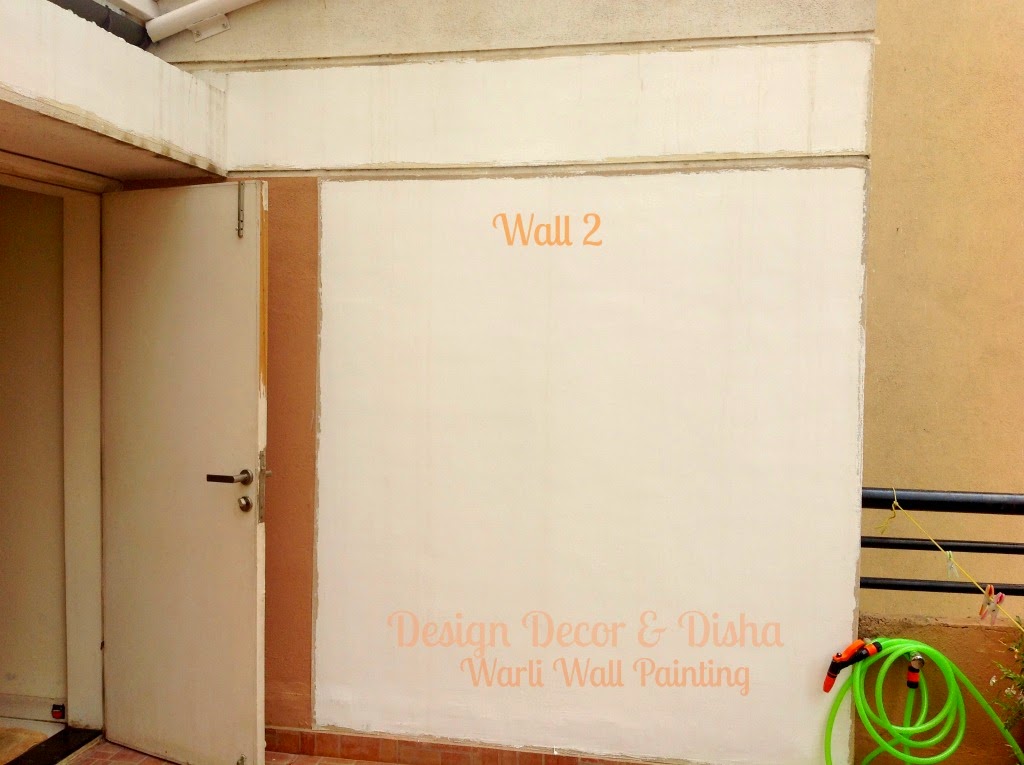 I followed the same procedure of drawing few designs first on paper, She chose one, then I traced it on the wall and finally painted it.
Here are some images of different figures that I made on wall. 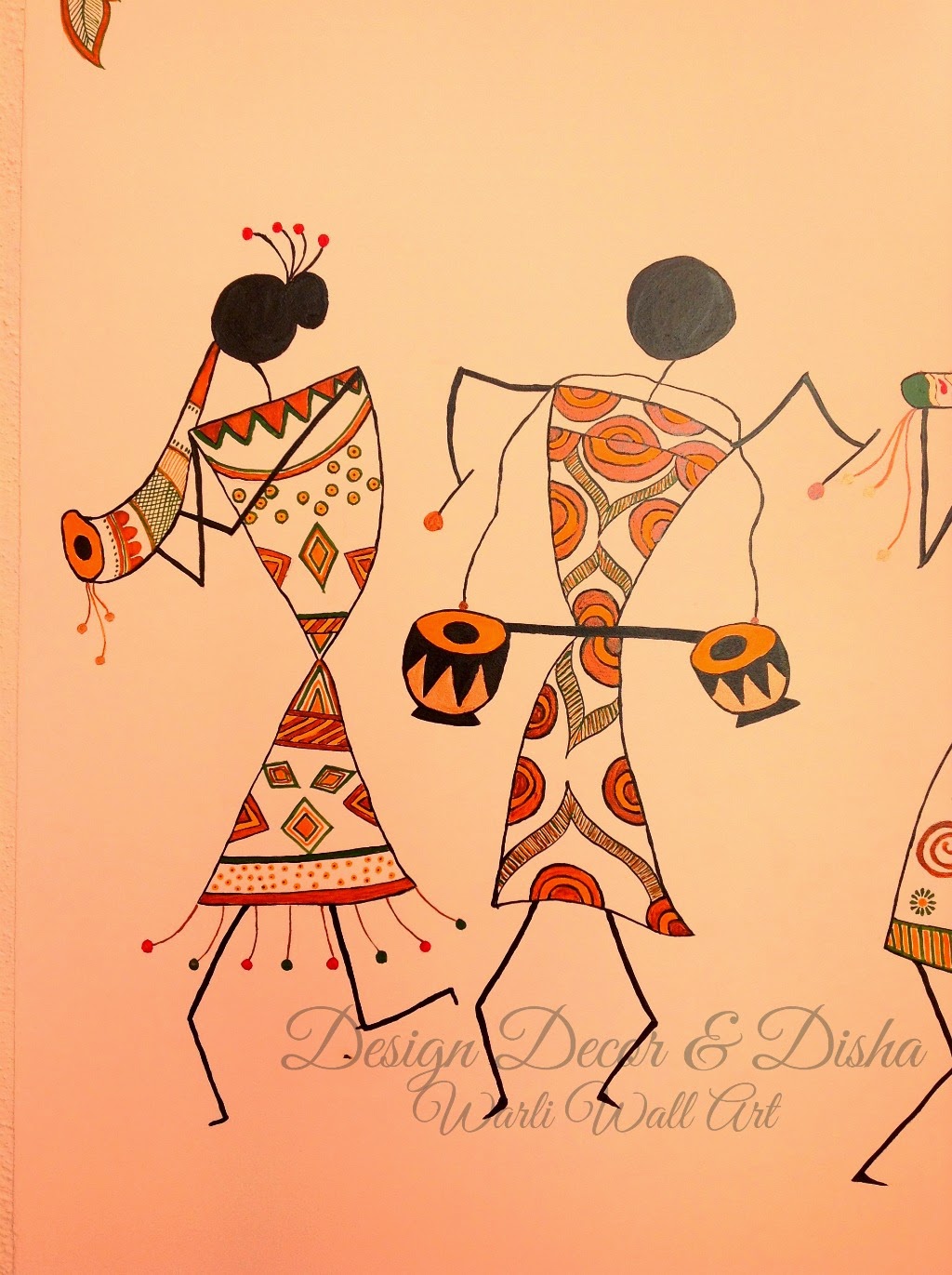 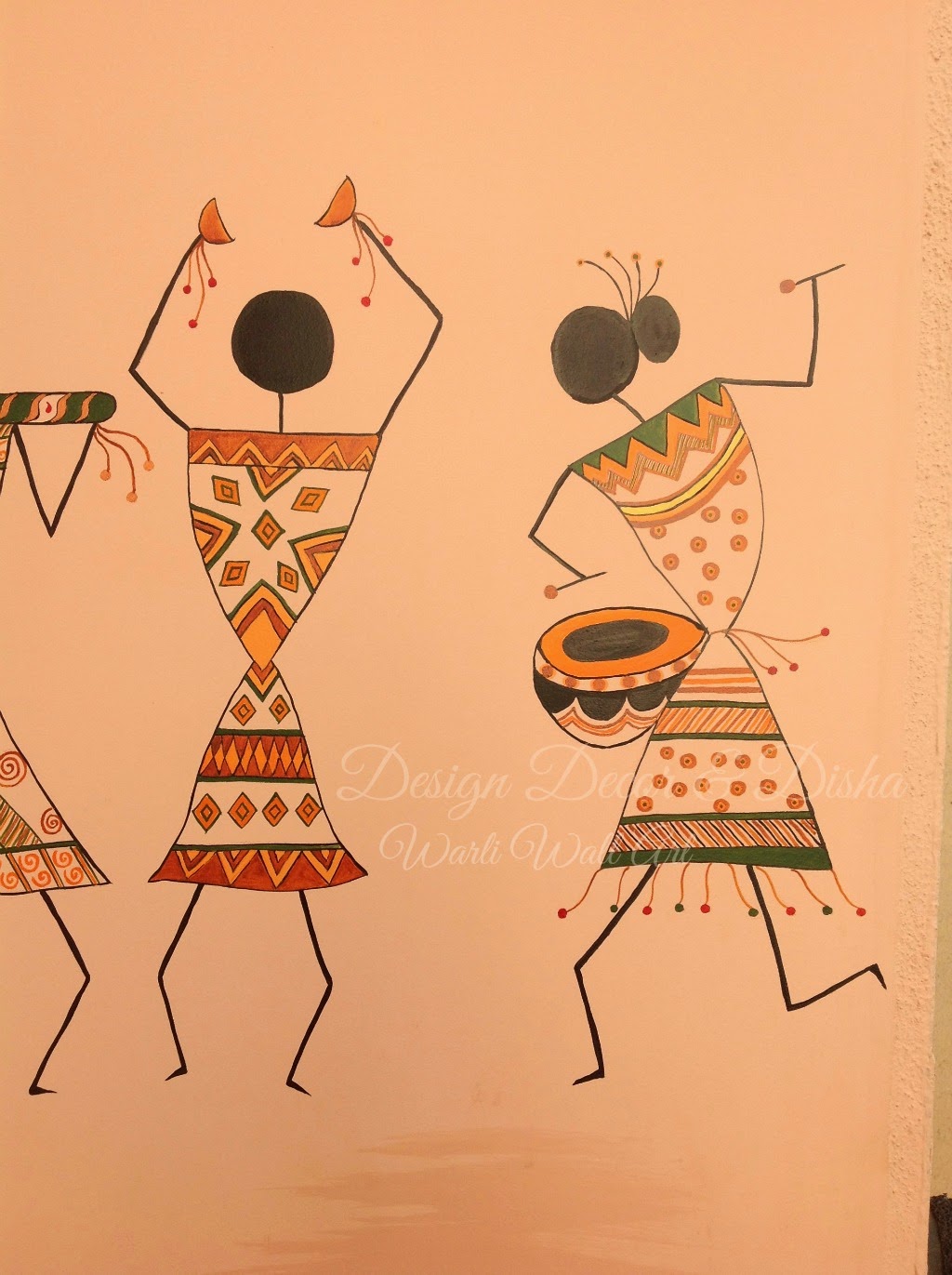 In the middle is doli of Warli bride and to the right and left of it are Warli men and women, dancing and celebrating the occasion. 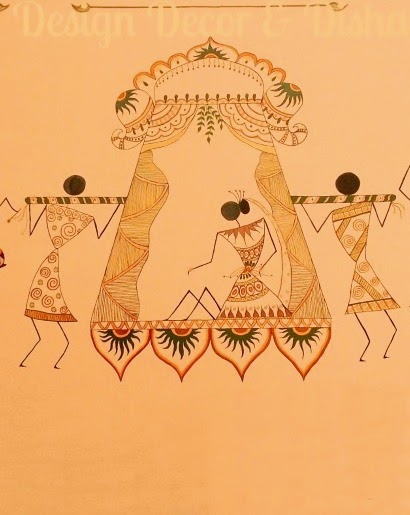 Below is the picture of the wall that was almost done, the only part left was filling some patterns here and there to make it look perfect. 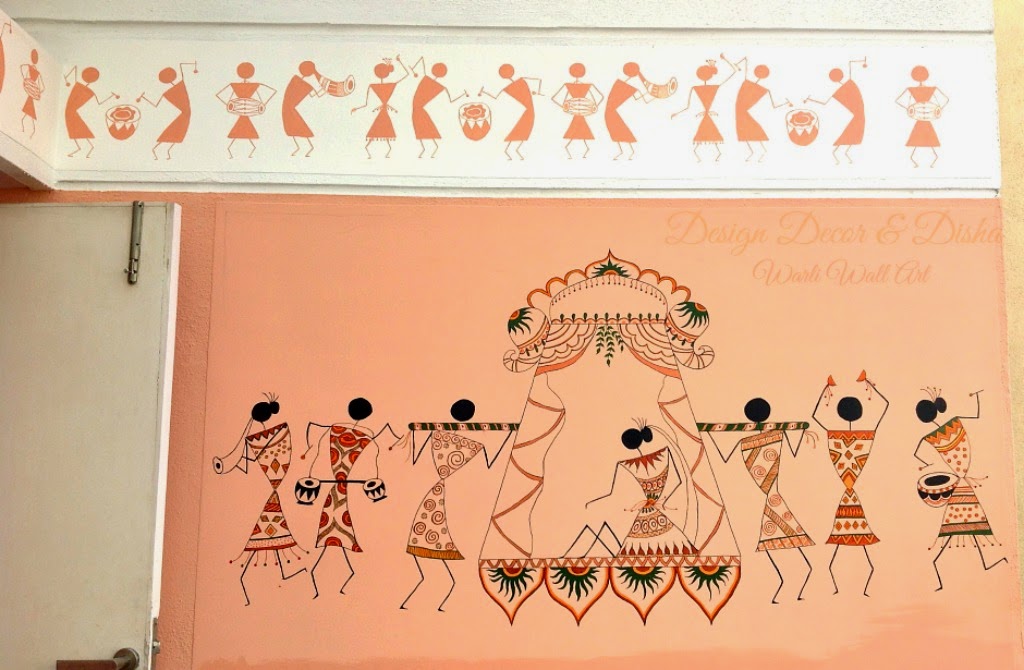 After all the patterns were done Mr. Nihalani suggested that we should make something on both the corners above and this is what I painted, inspired from one of the printouts she had. 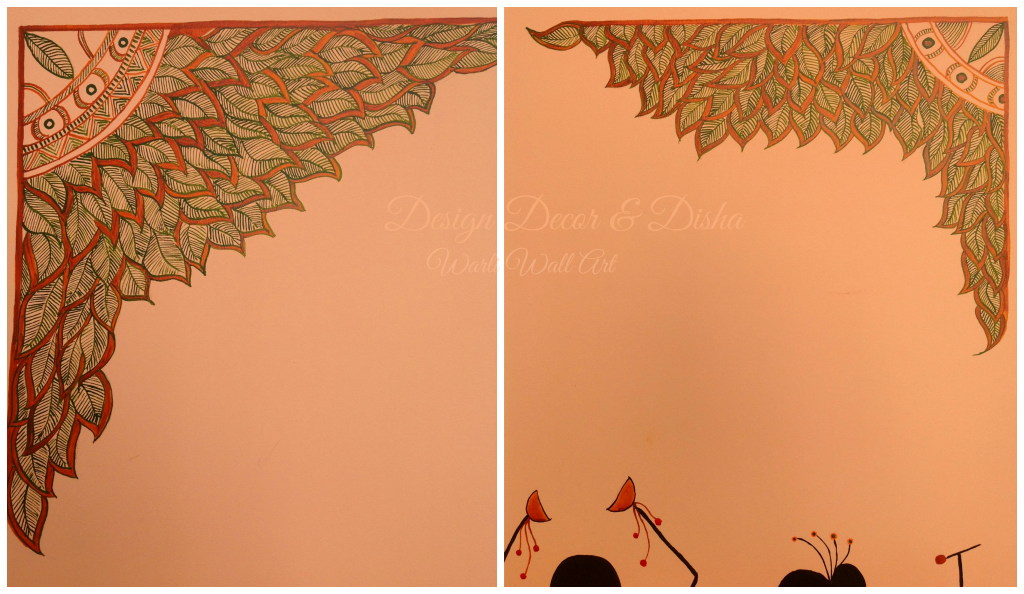 Here is the final look of the wall. Isn’t it a pretty sight. 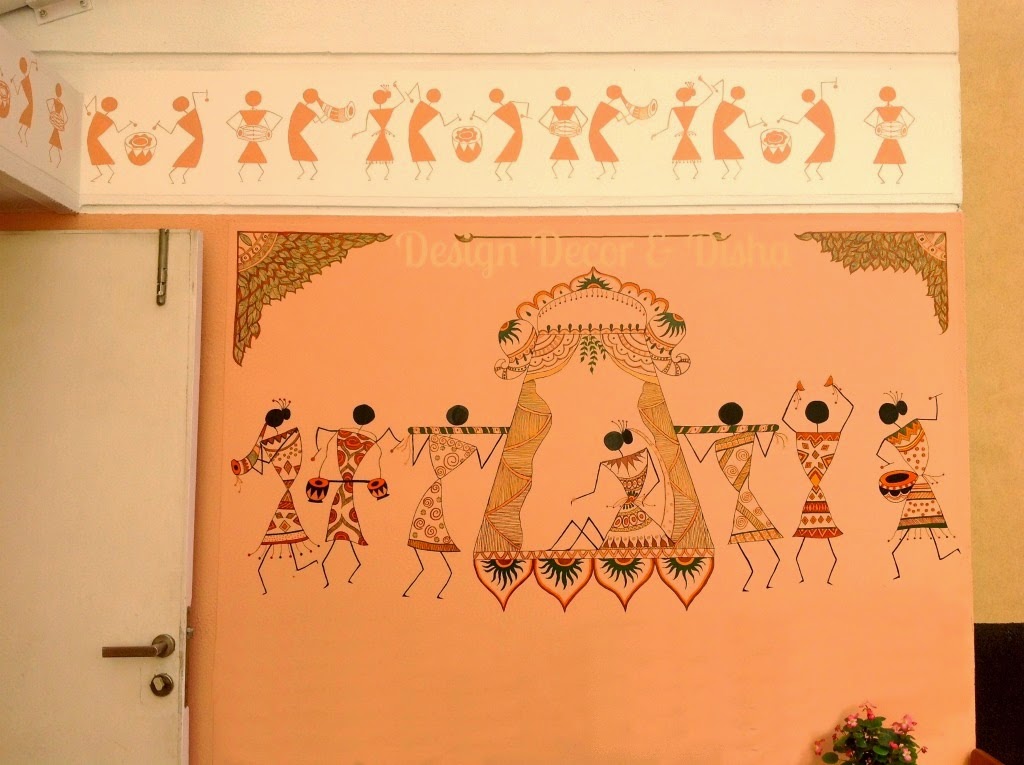 And now have a look of complete balcony. Both the walls in all their glory. Mrs. Nihalani gave a lovely complement by saying “please appoint me as your assistant when you become famous and whenever you paint something like this.

Do you like to meet the artists, here you go….. 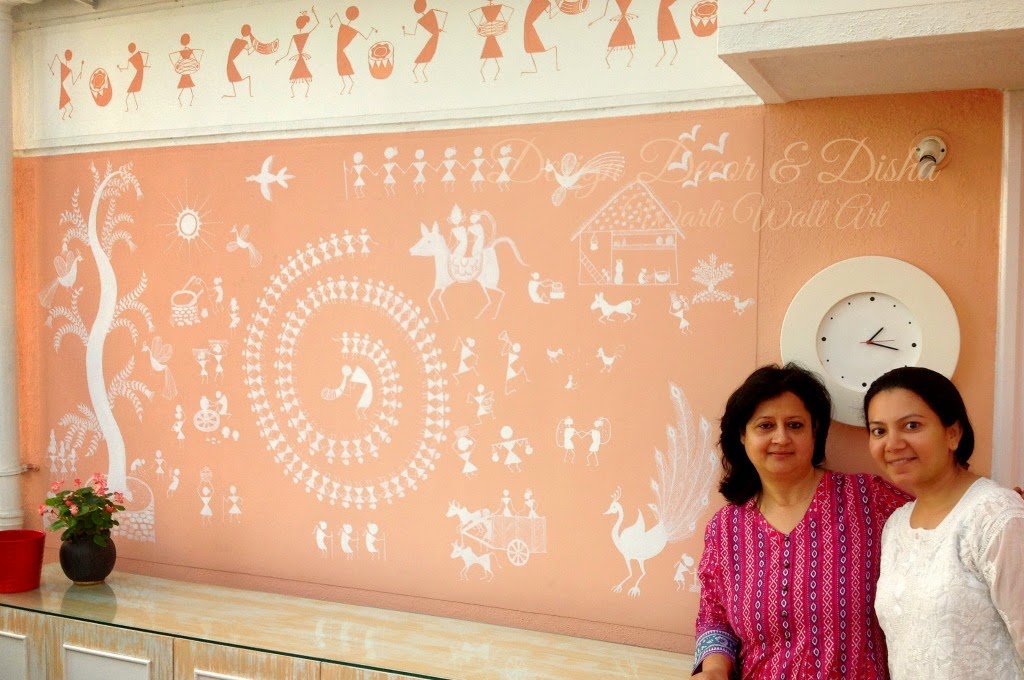 All happy, pleased and content with what we have created.

Now what do you think my dear readers, did you like my work. Which wall is your favourite one.
I will be waiting to know your views 🙂
P.S. All images are mine and subject to copyright. Please don’t use them without my permission. 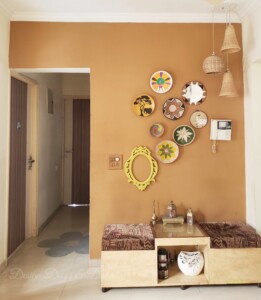 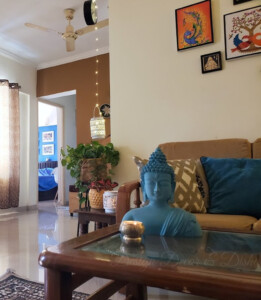 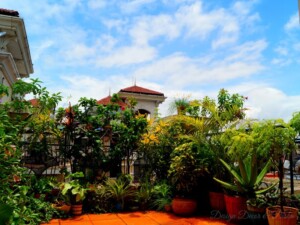